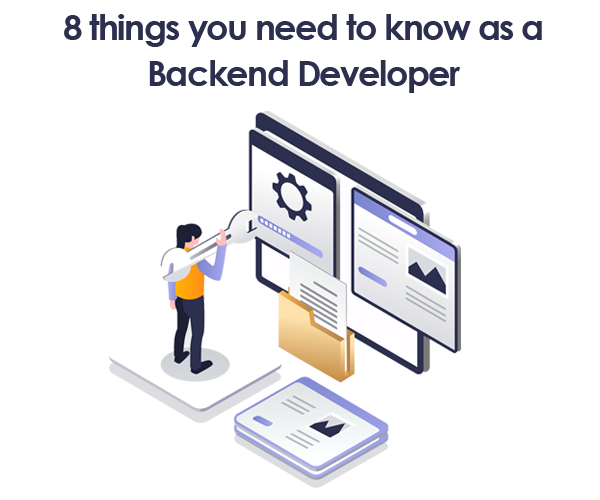 So you want to learn backend development? Well, the backend is essentially everything that is not user-facing. It’s the stuff that most users will never see or normally even know exists.

It’s what makes the frontend developers and designers able to build such a cool website. The backend essentially handles all of the logic, storage, and data of your application.

In short, it’s how your website thinks, remembers things, and talks to other websites.

If you are new to this field or looking for a new career opportunity as backend developer, here is a list of 8 Things You Need To Know About Backend Development And Its Different Types To Get You Started.

1. How to become a backend developer?

2. What is back-end development?

Back-end developers are responsible for implementing all of the functionality required to run a website. This includes creating HTML templates for pages, storing data in databases, parsing data from incoming requests, sending outgoing responses, and handling errors that arise during these operations.

Back-end developers often work in teams with front-end developers who are responsible for building the user interface (UI) of the site. These teams typically communicate using tools such as Jira or Slack to track issues and make decisions.

3. What does a Backend Developer do?

Backend developers build the code that gives an application its structure, functionality and appearance. They work with databases and back-end systems to create and store data, while also providing access to that data to front-end developers. They might also be responsible for performing tasks like automating processes or scaling the application to meet demand.

4. What tools backend developer use?

Web developers use a variety of tools to develop, test, and maintain web applications. Some common tools for back-end developers include:

In order to build a successful backend developer career, it’s important to have strong technical skills. Ideally, you should have experience working with databases and web applications.

6. What Roles can a Backend Developer play?

Backend developers can work in a variety of roles, from designer who builds the structure of an application to full stack developer who manages everything from database design to front-end coding.

They often have other titles as well: infrastructure engineer, DevOps engineer, software engineer or lead programmer.

They’re usually responsible for designing and implementing new features, as well as maintaining existing ones.

They’re also expected to be able to analyze data and make informed decisions about how best to proceed; this means having a strong understanding of software development best practices and a strong knowledge of computer science fundamentals such as algorithms and data structures.

7. What companies expect from Backend Developer?

Backend developers are expected to produce high quality software that is reliable and performs well. This may include working with other technology professionals like architects to ensure that the architecture is scalable, secure and efficient.

Backend developers may communicate with clients directly in person or via email or phone calls, as well as interact with other backend team members such as DevOps engineers or systems administrators.

In the United States, backend developers make an average annual salary of $88,320. The job outlook is excellent, with a 17% growth rate expected through 2024.

More than two-thirds of companies use back-end developers to build their websites, mobile apps, and other types of digital products.

Backend developers can work anywhere from a small startup to a large corporation. They can work as full-time employees or as freelance contractors.

Your email address will not be published. Required fields are marked *